For an embarrassing long time (cough, two years) there has been a striped beach towel serving as a protective cloth on top of the dresser we use for both a TV stand and linens-and-cub-scout-gear storage.

That I stopped noticing it due to excessive familiarity is the only excuse I can come up with for letting it go so long.  (I’ll use the same excuse for the dust on the TV.)

But this past weekend I finally noticed enough to realize Something Must Be Done.  Some stash browsing came next.

The palest yellow was eventually removed as it was too close to the background color, and another yellow with gray was added later.

I attempted inserting strips at crisscrossing angles with varying degrees of success in matching the ends of previously inserted strips.  Matching worked well when a new strip crossed only one other, but I need to work on when two strips slanting in opposite directions are slashed and rejoined.  That didn’t work out as smoothly, but it wasn’t off by enough to really bug me. 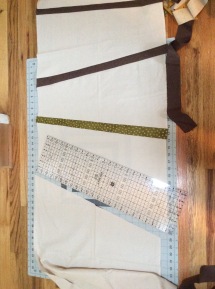 I added the quilting without the backing because I didn’t want binding on the edges.  It went smoothly except when I sewed in a scrap of fabric that had gotten stuck on the back because I don’t keep a very tidy sewing table. 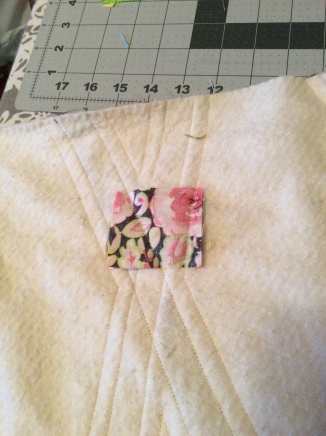 The backing is very plain because I didn’t have any other long yardage and didn’t want to piece anymore together.  No one is going to see the back anyway, though I did debate making it reversible for a brief moment.  Then I decided finished was better than reversible and sewed quickly on. 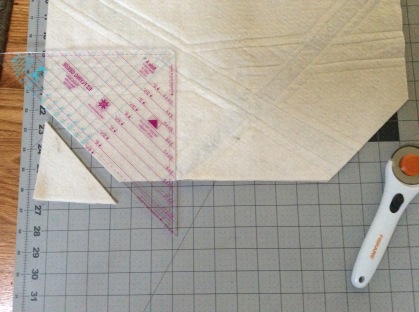 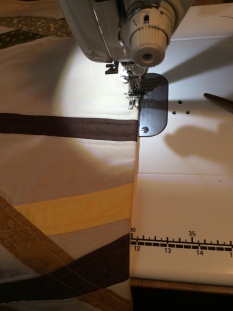 Then cutting angled corners, a quick flip right side out, some top stitching around the edges and the striped towel is gone from the living room.

A couple of additional notes: