Despite all the remodeling construction and Thanksgiving, I did manage to finish a couple of projects recently.

The first is a cowl I made from a yarn kit ordered from Craftsy, using the Toolbox Cowl pattern.   The yarn kit came with five colors, so I added a few extra rows to make each stripe wider, as the original pattern called for six colors. However, I didn’t calculate that extra rows in the garter/slip stitch section wasn’t going to really add much height.  So before I got to the mustard yellow, I dug out some cream yarn and added that in as well. I’m really pleased with the way it ended up. It’s a very comfortable, soft cowl.  And there should be enough yarn left to make the matching hat!

The next finish was my Noro scarf-turned-cowl.  This is the one that I ripped back four or five times and changed my mind repeatedly about how to knit it.  Then I had to graft together ribbing, which isn’t a smooth process when you are connecting top to bottom.  The stitches end up off by a half stitch which really complicates grafting even without adding in knits and purls.  There was more ripping out, and I learned not to graft on a light color row as every wonky bit shows more, but it is a circle now, and when it is doubled up around a neck the grafting isn’t going to show unless someone really looks for it.

If I’d had the yarn I would have immediately started another one, I was so happy with the results after all that ripping and indecision.  I think it would have been too short as a scarf, but it is perfect as a double wrapped cowl.

After that came a really quick fun knit that I can’t show yet as it is a Christmas present.  My mom sometimes reads this blog. . .

Then the fail.  More of a mechanical problem than anything I did, but it still meant I didn’t get the finish I was hoping for.  Sewing has really been on the back burner as we worked on the house, so I was really excited to start working on a quilt again.  And it is a simple brick pattern, already pinned in a sandwich, so I thought I could get it fully quilted and maybe even bound in one day.

I should have known it wasn’t going to go smoothly when it took 40 minutes of intense searching to find my walking foot in the one craft related box that somehow didn’t get unpacked and was hidden away in the rec room closet.

And then my sewing machine came apart!  I had stopped in mid-line to change a bobbin, and it wouldn’t start back up.  When I checked, the power cord had fallen out of the machine.  When I put it back in, it just fell right back out.  Further investigation showed that there was nothing to plug into – the internal prongs were gone.

I unscrewed the panel and found that the plastic housing for the plug had broken in two, dropping the prongs into the casing. 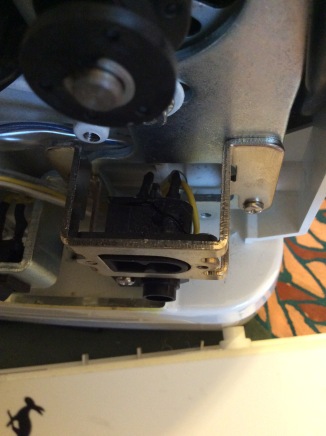 I probably should have stopped working and taken it in for repair, but I didn’t want to give up, so I grabbed the gorilla glue and some pins to poke things with and dropped glue in to put the pieces back together.  After it dried overnight, it seems to be holding, so I will use it very carefully until I can find a period of time where I am willing to live without it and take it in to have the part repaired.

But the quilt didn’t get finished as the next day I had to clear out the dining room because we were having company.  Sigh.  It has been a long time since I finished a quilt and I really thought it was going to happen this time.  The list of sewing WIPs is not getting any shorter.

At least I’m having more success with the knitting.  A new start with some handspun is coming along really quickly. 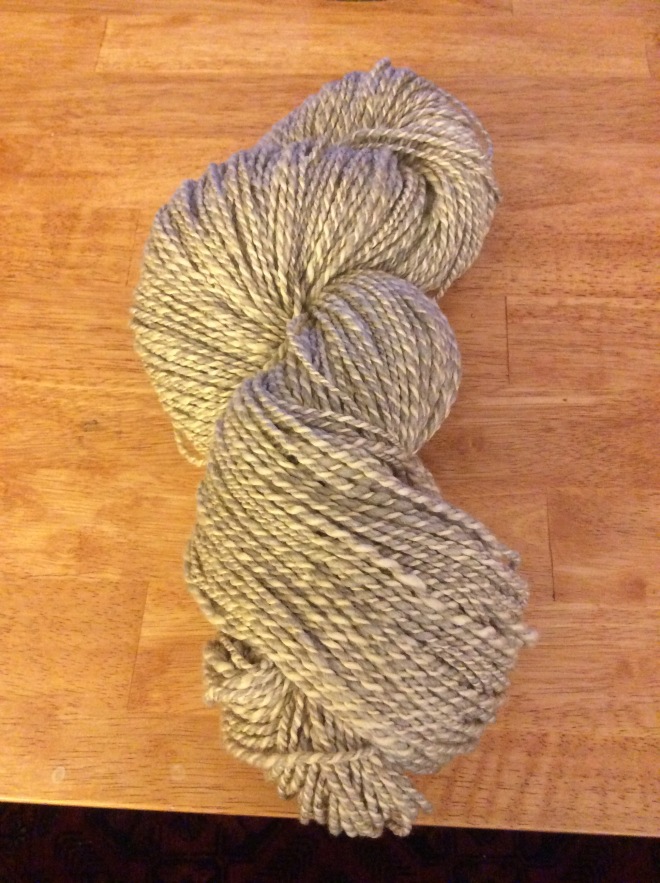 2 thoughts on “Two finishes and a fail”