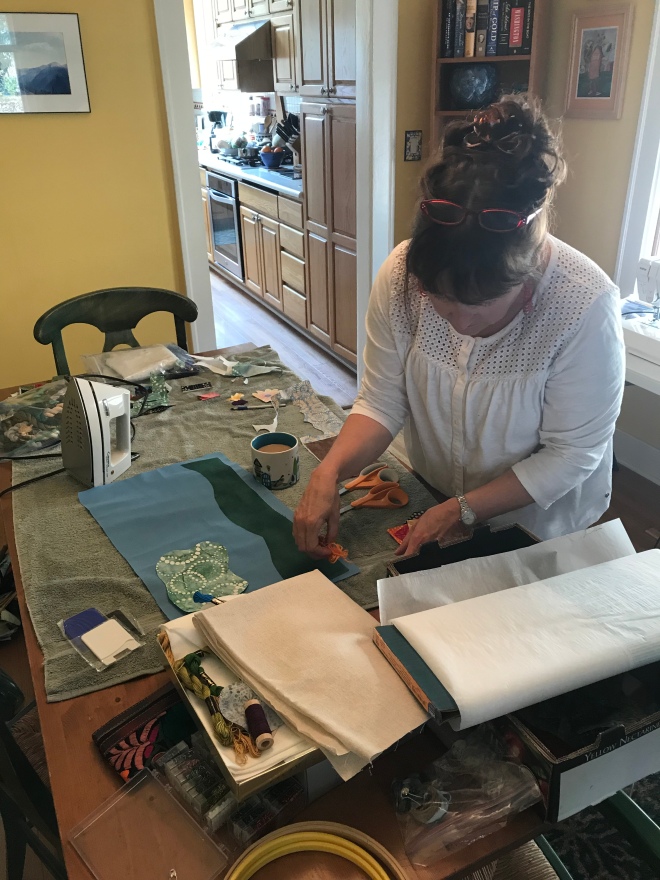 I went up to Seattle recently to craft with my cousin, Patti.  She had an almost finished fused fabric project that needed a couple of sewing details, so I brought my machine along.

What I didn’t bring was the power cord.  Argh!  Luckily, Seattle Leslie (as distinguished from Oregon Leslie in our fiber group) was willing to text her husband from her trip to the Midwest and he got out her spare machine to lend us.  Sewing can be a complicated multi-state business.

My cousin is generally a paper crafter, but occasionally she gets the hankering for fabric and floss.  Along with (parts of) my sewing machine, I lugged up bags of floss and batiks and WonderUnder fusing. 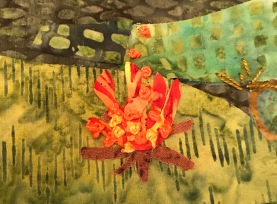 I stitched around some fused pieces of her camping scene that were losing their stick, and she added embroidery details – little clumps of grass, chains to hold up the hammock, French knot sparks in the fire.  I would love to have that camping spot! 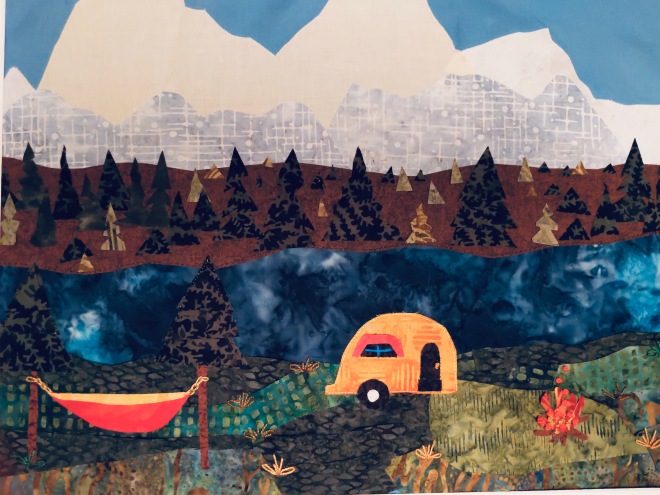 I fused some small geometric shapes and started connecting them with stitching, when I wasn’t knitting or walking their labradoodle – a dog so laid back that when it slowly wags its tail everyone around him takes note of how excited Teddy is.  Teddy is the chilled out dude of the dog world.  Our dog is a neurotic hyper wired mess in comparison.

Teddy in his usual mood:

Now Patti is moving on to little houses.  She got a few embroidery books and websites to learn new stitches and at this rate She’s going to be stashing fabric soon I’m sure.  Fiber hobbies are addictive. 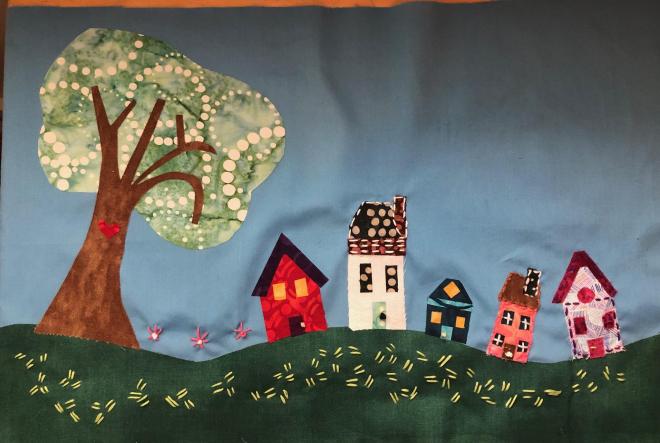 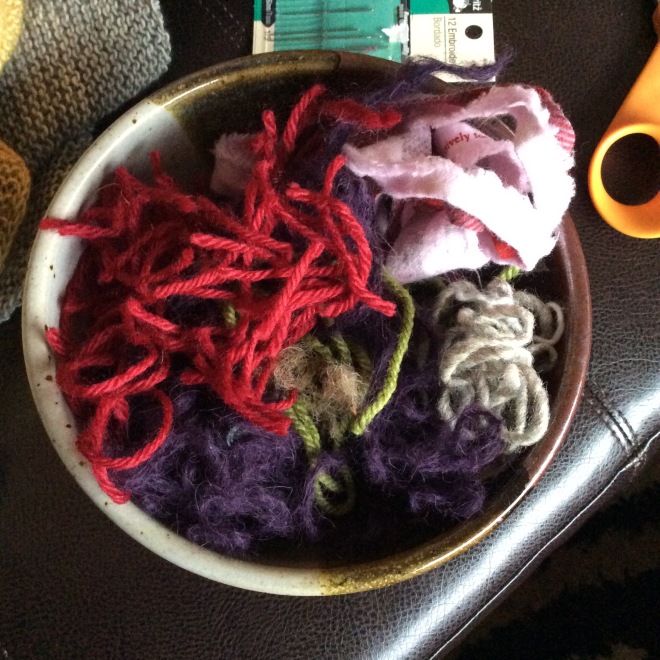 I just spent wonderful weekend in Seattle with my fiber friends.  It was the second finishing weekend of the year, a time when we dig out WIPs that have been languishing and dig in to get them done, along with a lot of catching up and some fabulous food.

Finding knitting projects was a little difficult for me as the last finishing weekend took care of most of mine that needed just a bit of seaming or ends sewn in.  Plus I frogged so many of my knitting WIPs.  Quilting WIPs weren’t going to work as I didn’t want to haul my machine and all the necessary bulky quilting supplies.

But I did have my blue sweater that just needed one sleeve sewn on, and my Volt wrap.  And there were some embroidery projects to sort through for possible finishing contenders, and spinning fiber in progress.  So in the end I had plenty to do.  Enough that it took several trips to get all the bags and bundles out to the car.

It was such a great time!  So much laughing and helping and exchanging projects and sharing ideas and accomplishments.  Portland Leslie likes to seam, and Seattle Leslie and I needed a lot of that.  Paige loves to sew in ends (so weird!  so handy!) and I was useful with machine binding.

Have you heard of Slow TV?  I hadn’t – apparently on Netflix there are hours and hours of Norwegian television that takes a topic and sticks with it through every possible second.  There are eleven hour celebratory hours of a boat traveling a Norwegian canal.  Eight hours of knitting talk. An entire multi-hour train trip captured on film.  And our personal favorite for weekend viewing, five or six hours about wood chopping. 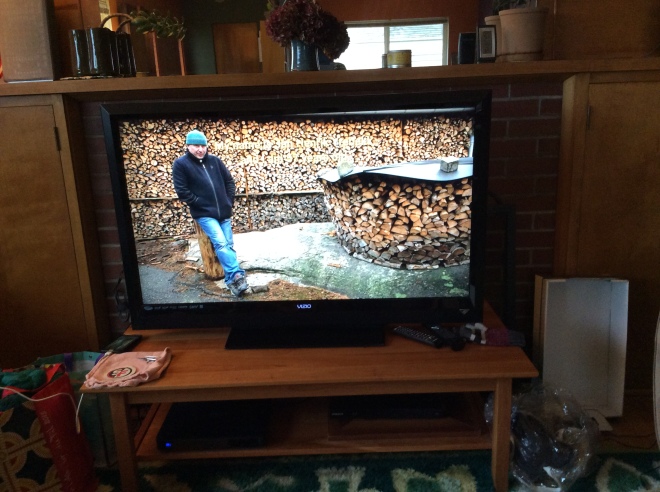 Everything about wood chopping.  How to stack, how to chop – and all the possible variations of both.  Wood deliveries, wood tool, music with chopped wood, contents on wood stacking, how to cut a piece of wood so that it is a burner for tea and a stool.  The apparently bitter controversy over bark up or bark down in the wood pile.  It was both tedious and mesmerizing.  And all in Norwegian and subtitles!  We had it on for hours, and yes, I’m aware of how crazy that sounds.

Another highlight was the tour of Seattle Leslie’s fiber stash.  It is impressive!  Walls of IKEA bins full of spinning fiber, and more cases and boxes and bins of the yarn she has gathered since the days when she worked at a yarn store and was paid in yarn.  We treated it with the respect normally given to museum visits.

We ate, and drank gallons of tea, and laughed, and got so much done.

I finished my embroidered undersea scene that I started in a class I took a couple of years ago. 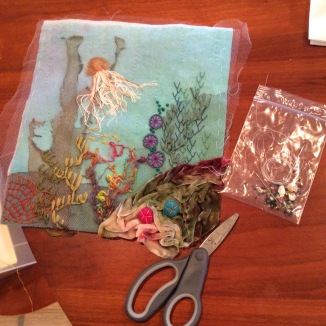 I also got the last four oz. of my Ashland Bay merino spun and plied both bobbins into finished skeins just needing their bath. 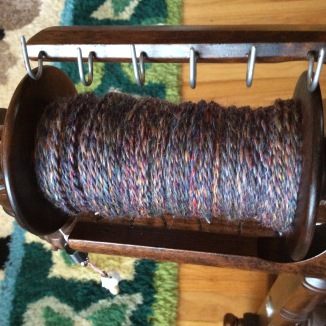 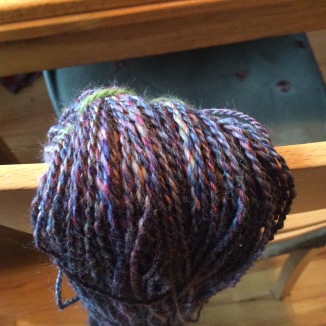 My Volt wrap is just two rows away from needing the attached i-cord edging, and my blue sweater has its last sleeve attached. Just needs a zipper now. 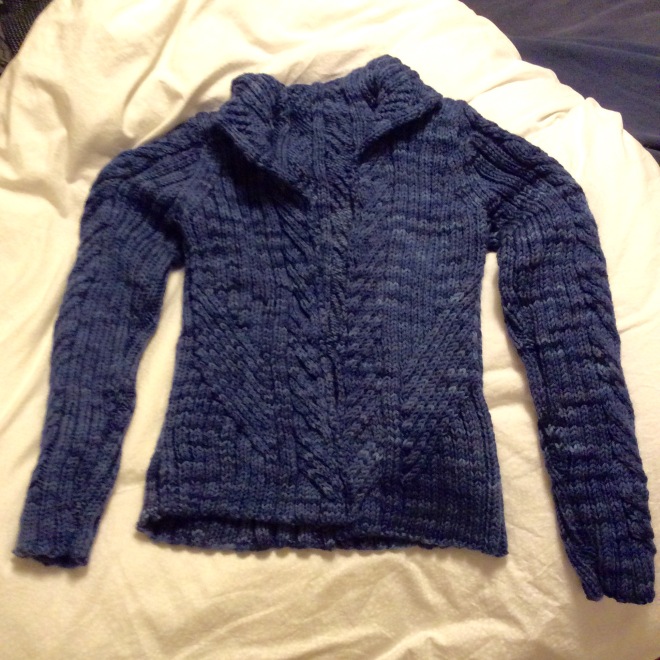 Everyone walked away with a lot they could cross off the WIP lists.  The photographic evidence of all we accomplished: 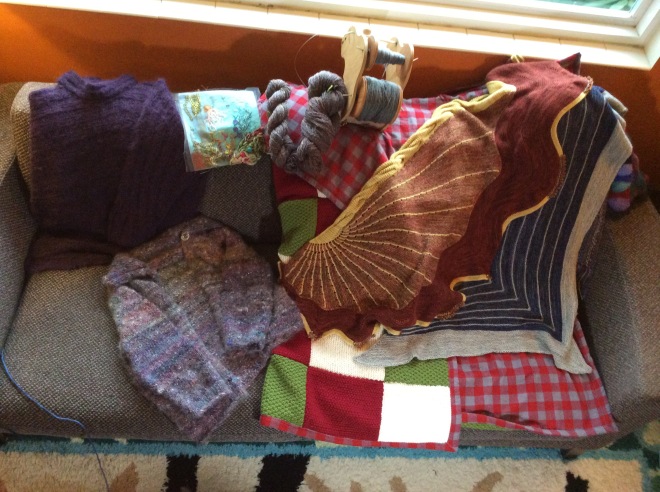 That blanket at the bottom was a major team effort and is going to get a blog post all of its own very soon.

We are already planning the next get together.  There is talk of an AirBnB in Olympia in the new year.  Can’t wait!

I’m revisiting my WIP list from early June to keep myself on track.

A lot of frogging has greatly reduced this list. 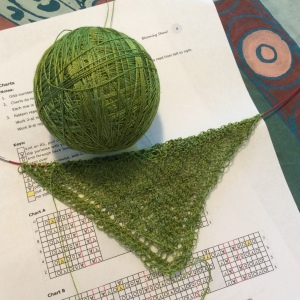 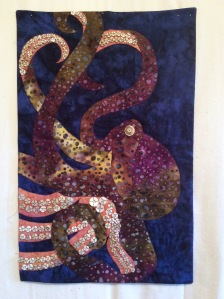 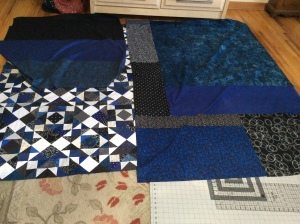 Most of my progress was destruction rather than construction and in the knitting part of the list, but there has been some progress on the quilting front as well. A good start considering it was the busy end of the school year (checked in 8000+ textbooks!) and we went on a week long coastal vacation.

July is the start of the kitchen remodel, but I still hope to achieve more on the sewing front. 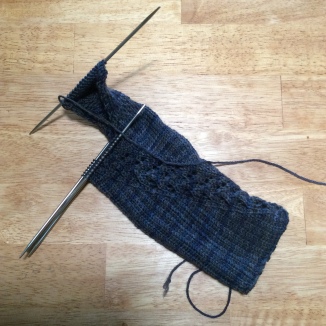 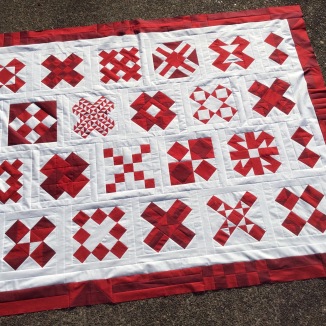 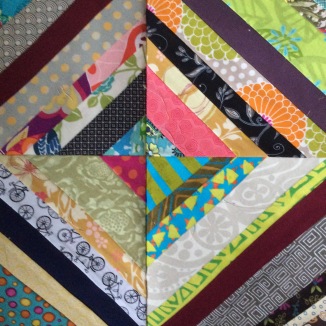 I’ve always liked the word plethora – the sound of it – but in this case, a plethora of unfinished projects is way too much to keep warehoused.  Projects must be finished at a much higher rate!

Back in March I made a list of quilting WIPs, but today I went rummaging and created a much longer one for all my crafts. There can be only one conclusion – I have too many fiber hobbies.

A lot of this project list can be disposed of quickly as it just requires doing away with the projects – many I stopped knitting because they weren’t working out, but they are still hanging around. 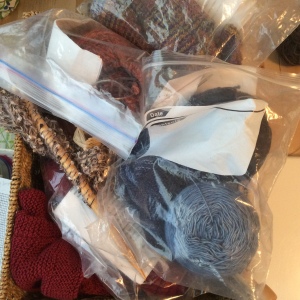 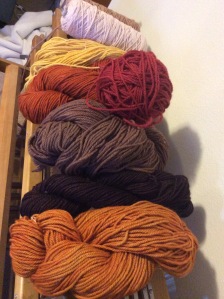 This project list is thankfully short – just one project started, a rug that I’ve partially warped for recently.  It will be very quick once I start weaving.

The last time I checked my Excel chart, I had just under 27 lbs. of fiber to spin.  The mere fact that I need an Excel chart shows how out of control this hobby is!

Currently going on to bobbins: 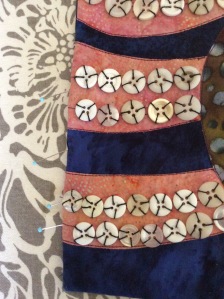 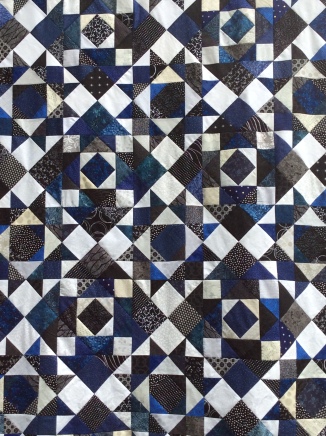 I’m sure there are more that I’ve missed, so this list may grow before it shrinks, but I am vowing here and now that it will shrink!  My goal for the summer is to halve it at least.  And this public posting, with updates, is going to keep me motivated and honest.

It is definitely, finally, spring around here.  Cherry blossoms and daffodils and all the weather extremes.  The geese are flying away and the robins are coming back. It can be sunny on one side of the street and raining on the other side.

Cats are lazing about in sunbeams. 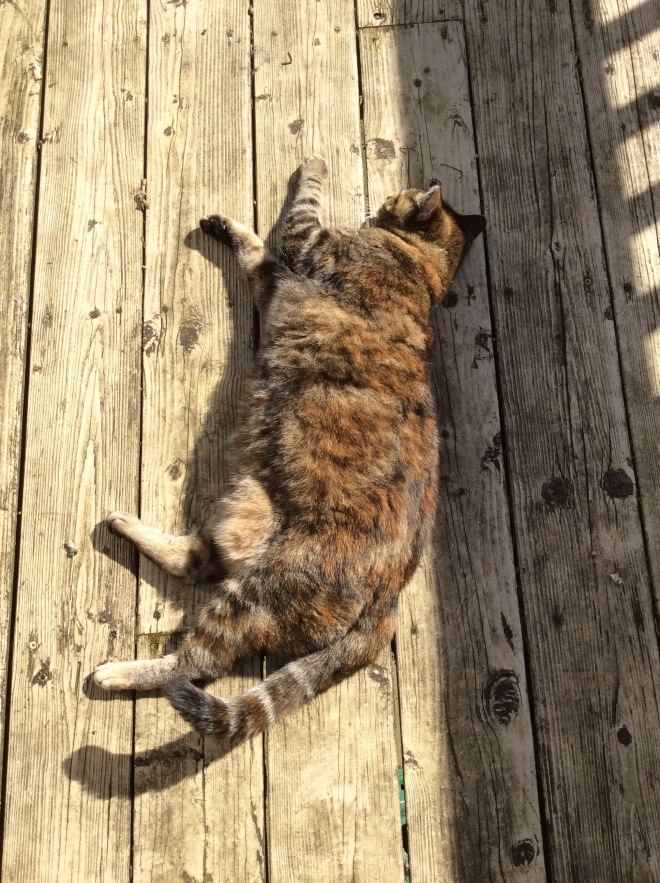 It seemed a good time to finish a mini quilt I started a while back as an experiment with writing in thread. 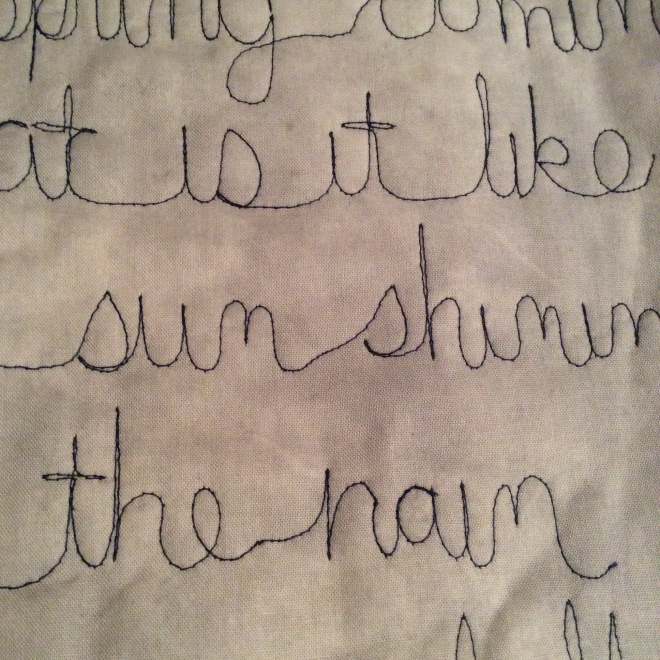 It was semi-successful.  I’d like to have the writing smaller next time, but it is legible!

I added some sun,

and some finishing touches, 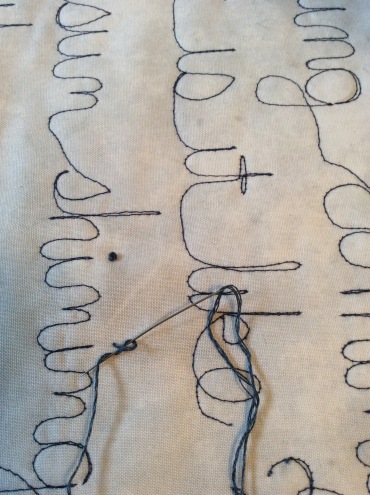 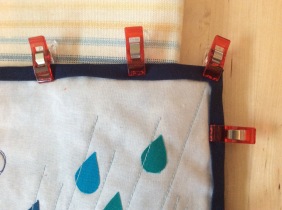 and I have a little bit of the spring to hang on a wall. 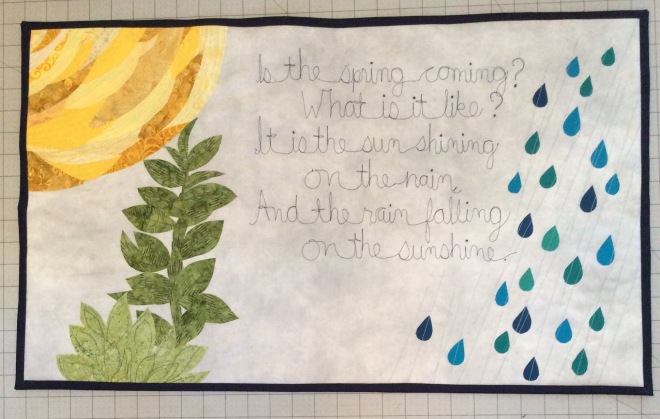 The quote is from The Secret Garden by Frances Hodgson Burnett.

I can’t remember what combination of blog links led me to this post on the TomofHolland site about a visible mending project, but I liked the ideas behind it, and the visual effect, and put it in my mental try-this-someday file.

Enter my charcoal cardigan and a small hole in its front. 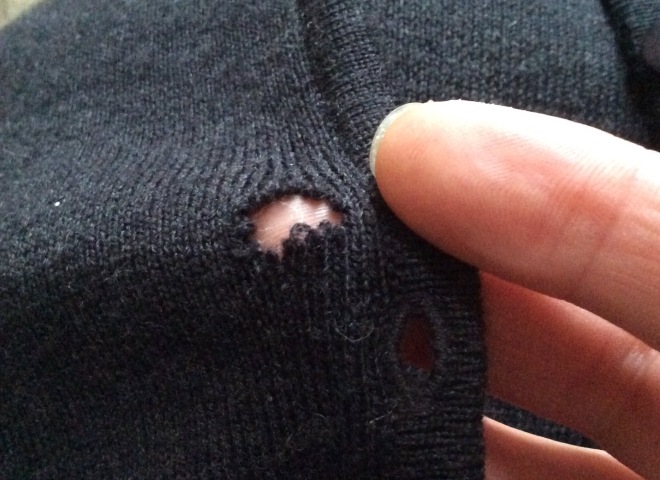 I looked up some mending techniques, as my experience with repairs has been solely machine based before this.  I followed the directions found here, that I had saved to Pinterest a while back.

(Brief tangent to rant about how angry Pinterest is making me.  Trying to access my boards through my browser is impossible as it demands downloading the app onto my iPad. I don’t want the app, but it won’t let me see my boards or search for pins without the it anymore.  Why won’t they just let me use the website?  Why do they care how I get to it, as long as I’m using their program?  I don’t like the app interface.  And now I don’t like using Pinterest either.  End rant.)

Here is the result: 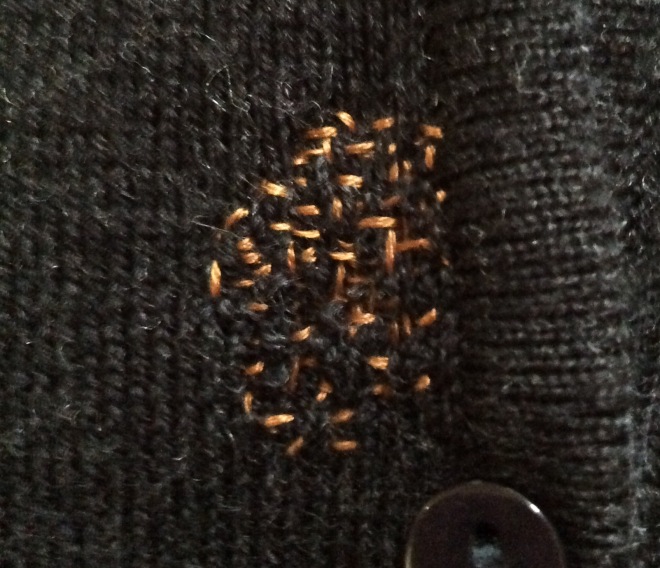 I rather like the scattered seed stitch effect, but I’m not sure I like the appearance of the mend on the sweater,  it looks a little like I spilled something on my stomach.  If there were more holes, more mended areas, it would look better.  But I’m not going to chop more holes, so I think this is coming out, and I’ll mend it again with a charcoal thread.

But I’m going to keep the concept in mind for the future. 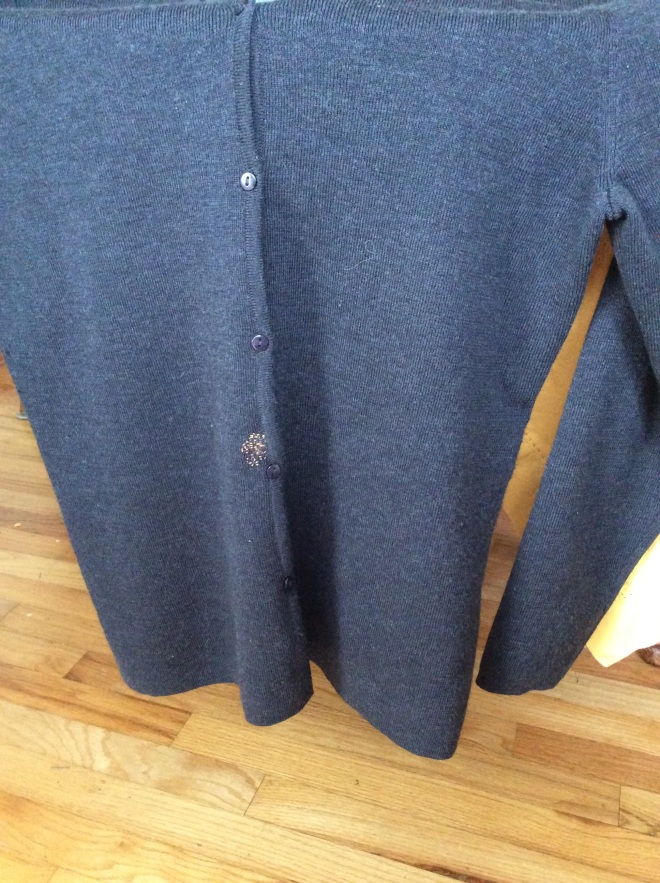 A bit of progress, in-between setting the lawn on fire with firework sparks and trips back and forth between my mom’s and IKEA to furnish her new condo’s extra spaces. 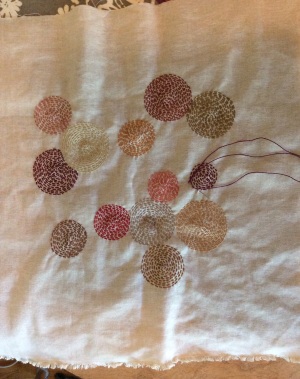 But mostly it has been making sure that the kids weren’t setting themselves on fire.  I hope everyone had a safe and sane 4th!