I’m still spending a lot of time in the garden each day.  I am really loving the spiral vine anchors that the various vegetables are putting out.

But I have learned a lesson about not scouring under every leaf when harvesting. These zucchini grow fast!

These seem to have grown overnight!  So much for my plan to pick them when they are small.  I only turned my back for a minute!

And the summer squash have started as well. 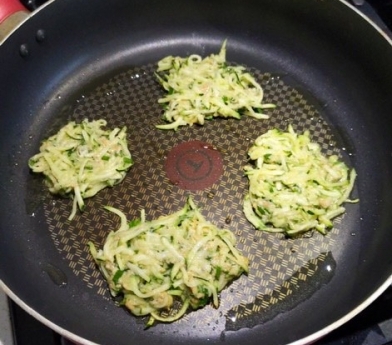 And now the cucumbers are beginning. . . 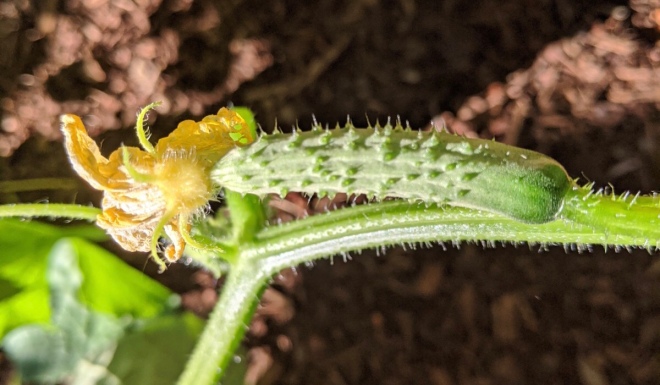 It is smaller than my pinky now, but there are at least 12 plants! I may not have thought out this out carefully enough.  I’m going to have to start sneaking veggies onto my neighbors’ front steps and running away.

When not out watching my vines grow, I managed to finish my caramel/papa sweater. After ripping it out three times, I finally got it right. (Switching to an entirely new pattern helped.)

The second sleeve went quickly, and I really love the useful new stitch markers I got recently.  Usually I use coil-less safety pins, but they’ve been disappearing over time as all small things do, so I ordered this colorful set of bulb shaped pins.  I like to leave them in the sleeves to show where all the decreases are so that I can make sure I’m matching the sleeves as closely as possible.

I’ve been auditioning red yarns for the duplicate stitch.

The duplicate stitching is going to be my evening TV watching project, so it probably won’t finish too quickly.  It is too hot for sweater wearing right now anyway, so no hurry.

I’ve never been a mall shopper on Black Friday – the thought of the lines and crowds horrifies me.  But I did take advantage of the shopping-from-the-couch opportunities to do some fiber related shopping.

This all came in the mail over the last couple days:

The quilt kit is a Christmukkah present for someone else, but the rest is for me. Kaffe Fassett shot cottons!  And I already totally love using both the ruler gripper and the little Japanese thread snips.

Both of those got a test drive this weekend as I did a small sewing project: 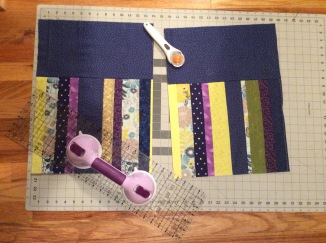 Quilt as you go, two at a time placemats.  I’ve lots and lots of scrap strips, so the four I made yesterday are just the start, and making two at a time really sped things up.

I also guided a a bit of a family assembly line in the kitchen as the second project of the day:

Four pans of lasagne for the freezer.

We were all about the mass production yesterday!

Dec. 7 – Updated to add that I forgot all about this Black Friday purchase until it came in the mail last night!  90″ x 20 yards of Pellon Nature’s Touch batting.  I haven’t used this kind before – I’ve been using Warm & Natural lately, but that roll was getting low, and this one was on a super sale.  It feels good to the touch.  I’ll keep you posted about what it is like to work with.

My family tree is filled with Danes.  My ancestors spread from Denmark to the Dakotas and then to the Pacific Northwest. My mom was a Christensen, and married my dad, another (presumably unrelated) Christensen. A Norwegian or two found their way in, and we’ve since added branches for family members from Taiwan, Israel, Japan, and even Alabama, but we maintain a few Scandinavian traditions for the holidays.

When I was little, my Uncle Ray (one of the Norwegians who snuck in) would always make lefse, a Scandinavian potato bread, for Thanksgiving and Christmas dinners.  As we got old enough, my cousins and my siblings and I got to help.

Uncle Ray had high standards.  Insufficiently round lefse meant wielding the scissors to trim them back into shape.  Thin meant really thin, not the lumpy, uneven surfaces mine tended to.  However, Uncle Ray also was a firm believer in a couple or three cocktails while cooking in the evening, so inevitably, some lowering of the standards crept in.  Those lefse didn’t make it to the feast, however.  The mistakes were eaten out of sight, to the joy of those of us who got to gorge ourselves on them.

I’m not sure what Uncle Ray would make of this:

The ingredients in lefse are really simple.  Potatoes, butter, flour to hold it all together.  Some recipes call for cream, others leave it out.  We’ve done it both ways successfully.

Our recipe calls for drinking potato based alcohol while preparing the potatoes, but that is also not a strict requirement. 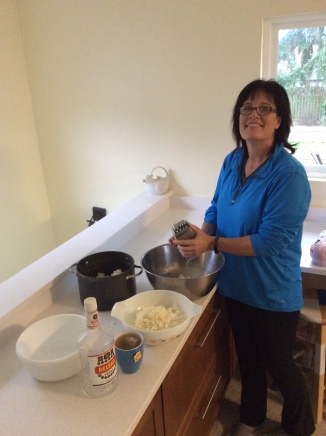 This year’s lefse makers were my mom, my sister, her younger daughter, my older son, and me.

The potato ricer seems to have vanished into thin air, so we used a grater to rice the potatoes.  Not ideal, but whatever gets the job done.

Every year there is a learning curve to rolling them out and getting them to the pan with the lefse stick.  But as you can see from these pictures, we do improve as we go.  And if some of them are more fjord-coastline than spherical in shape, well, we just eat the evidence with some melted butter. 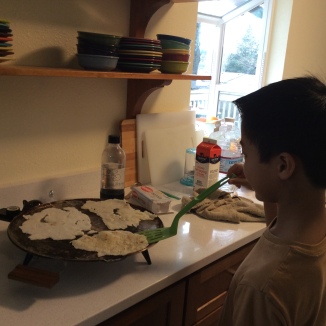 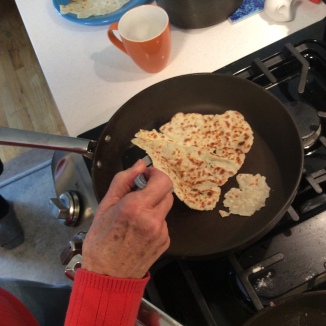 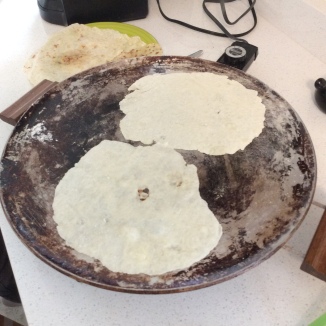 Lefse is supposed to be made on a flat griddle that gets really hot – we set ours at 450 degrees.  But I only have one, so we added in large frying pans and gas burners turned up high.  It was a struggle to get the flimsy uncooked pieces into the pans with high edges, so a second griddle is on my shopping list.

I inherited my grandmother’s lefse griddle, but a few years back it was plugged in and immediately caught fire (that was the year  we added vodka to the routine – everything went wrong to the point of almost succumbing to purchased lefse, and a bit of drinking seemed to help as we lurched from crisis to crisis). So my lefse griddle is a replacement.  If anyone knows a way to clean that black off aluminum, I’d love to hear suggestions!

We eat the lefse a lot of ways – rolled around turkey, with warm butter, with cranberry sauce.  We like them with cinnamon sugar, which is apparently heresy – my sister was once threatened with lefse confiscation by a Norwegian for doing this, so Americanisms have definitely crept in.  Now that Uncle Ray is no longer with us, we’ve thankfully abandoned the gelatinous lutefisk he served with them.  (No one should make small children eat lye soaked boiled fish – it is just cruel, and a holiday feast mood killer.)

We could probably swap out most of the foods we eat for Thanksgiving for different ones without much protest from the crowd, but not the lefse.

Ours may not be pretty, but it is oh so tasty!

A final note: my sister has declared blueberry-pomegranate tea with a splash of vodka to be the official Thanksgiving Eve beverage of 2016.

(I feel compelled to say that really, we aren’t much for drinking usually.  Our bottle of cheap vodka is at least four years old and I had to search for it in the garage.)

To those of you who gather with friends and family for this American holiday, I wish you much laughter, fine food, and a complete absence of political arguments.