My brother lives on the east coast, and the winters can be bitter.  He’s a fan of my knitting, although I still haven’t recovered from the time he machine washed the handspun cabled blanket I knit him and turned it into a small bullet proof rectangle.  I try to make him something warm periodically, and I definitely owed him because he just made me the most beautiful cutting boards:

They are walnut, made from a tree on his land that came down.  He bought a little mill saw and now he can make his own boards!  I love them both, but especially the one on the right which he left with the live edge.

And the grain is gorgeous.  I’m not sure I’m going to let a knife near them.

He also made a stack of small cheese boards for my friend who wanted them for gifts for her office mates.

And for my mom he made one using dark end grain cuts.

The most creative one I somehow missed taking a picture of – one in the shape of a flying pig for my sister.  I can’t believe I can’t show it to you.  I’ll have to add it if I can get her to take one.

Anyway, as you can see, the man deserved more hand knits!  He’d asked me a while back for a scarf that he could pull up over his head and around his ears when he’s out walking in the cold.  I took some chocolate colored baby alpaca yarn my friend brought me home from Peru and made him a hooded scarf.  It is about the simplest possible pattern – a biased garter stitch scarf with a seam added to create the hood.  I threw in some noro kureyon stripes to add a little more color to it, and made it quite long so he can wrap it around multiple times when he needs extra wind protection.  He can also push down the hood and it just looks like a normal bulky scarf. 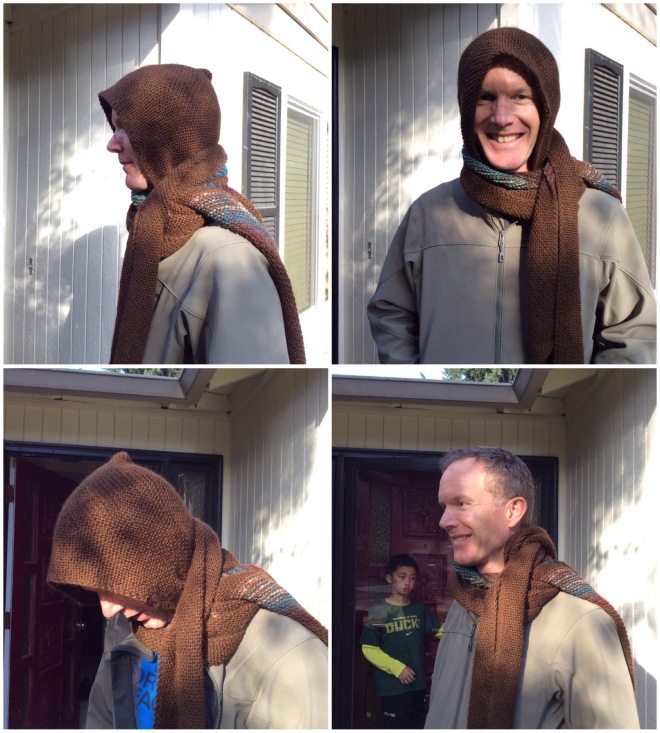