I’m awarding myself an unexpected gold medal because I did in fact finish my Knitting Olympics wrap before the extinguishing of the flame at the end of the closing ceremonies.  Of course, this was on NBC time, rather than the Korean peninsula time zone, but so was the casting on, so I’m counting it. 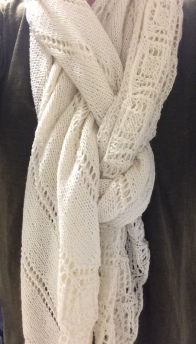 I owe my victory to two snow days and a late start, so thank you Canada for the cold front assist.

The blocking may have been a bit excessive – this thing stretches to the floor if I don’t double wrap it.  In some hazy future I will soak it again and reblock for width and reduced length, but for now, I’m just loving it.  I’m almost sad that spring is finally starting to show up because I won’t get to wear it for months and months.

Not sure why it then took me two weeks to get that finish posted, but life gets in the way. 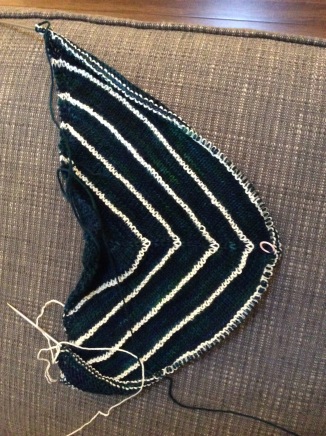 I’ve moved on to another wrap, this one called Pralines.  I ripped it out three times in the early stages, twice because I didn’t like how I was managing carrying the light yarn up the edge, and the third time because I decided to change the contrast yarn altogether.  In stead of a greeny-blue yarn I dyed a while back with Olympic white left-overs , it is now the greeny-blue with a variegated lighter green.  Looks less like I’m knitting nautical wear.  If I had the brown yarn shown in the pattern, I’d have used that because I love the color combination, but I’m trying to knit from stash. 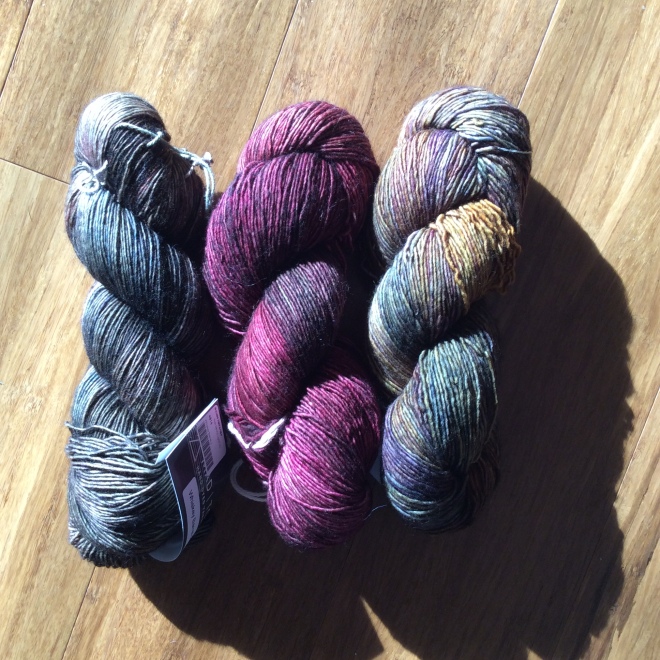 Which, by the way, is totally my excuse for buying three new skeins of yarn at the Rose City Yarn crawl last weekend.  I needed the new yarns to go with three skeins I already had, so I could make some two color shawls I have my eye on.  can’t knit from stash if it doesn’t match!  None of my remaining sock yarns really went with each other.  So I was pretty much forced to buy more yarn, right?  (Oh, rationalization.  It makes for great shopping sprees.)

My friend Paige came down to spend the weekend, so there was much knitting and yarn shopping and making of bagels.

That last became a full family affair because the many stages of bagel making were so interesting.  Kneading and pulling, then broiling, boiling, and baking.  We had a great time, and then a fabulous bagel feast. 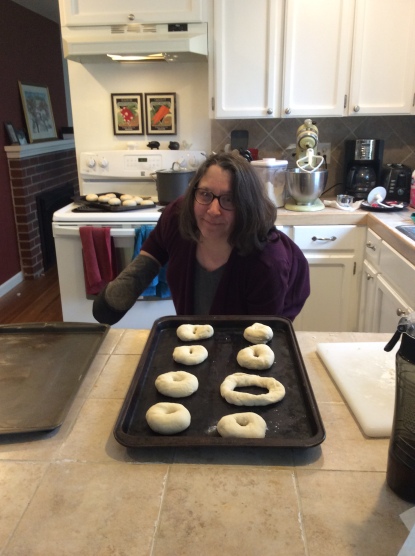 A surprise snow day!   They sent us all home from school at noon, worried that the sudden snow was going to cause havoc for the buses later in the afternoon. So now I’m at home working on my Olympic wrap, and watching the Norwegians win every medal that requires a cross country ski.

I’ve passed the halfway mark on my own Olympic efforts, but unless we have a lot more snow days this week it is going to take an Olympic miracle.

One skein of Sockulent got me through the first branches chart repeat on Understoried, and through the men’s aerial skiing, which looks terrifying.  How do they get the nerve to hurl themselves so high and twist so much!?

The Chinese New Year means we are now in the year of the dog, my husband’s year.  Cute Theo photo in honor of the holiday:

And, finally, I would also like to introduce what may be the first ever clarinet/guitar duo.  At least the first I’ve ever heard of.  They have big plans to take the music world by storm, as soon as they learn a few more chords. 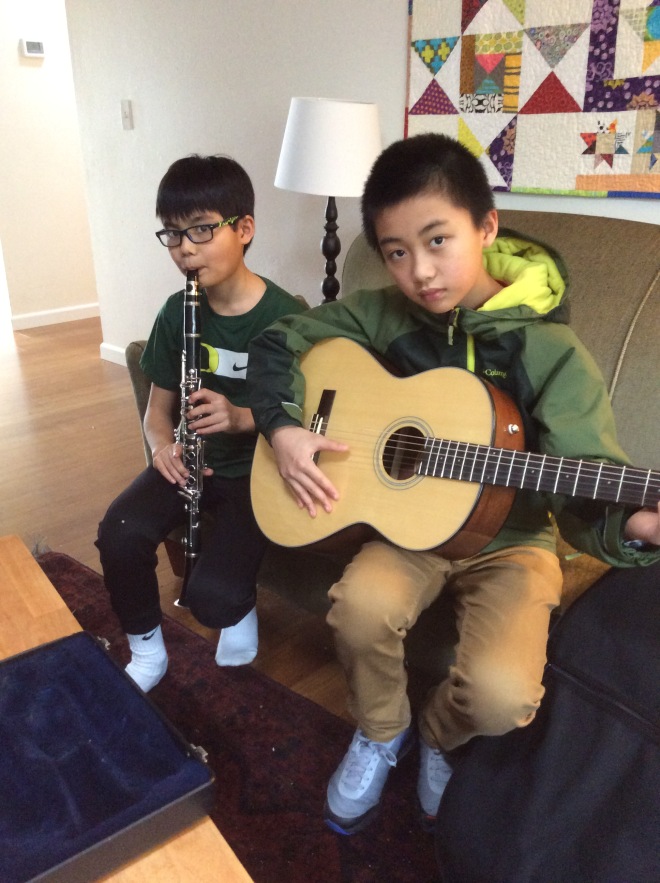 I am not a sports person.  I can identify many of them if I see them – “That is a baseball!”  “That is a hockey puck!” “Look, that woman is bicycling!” – but I don’t know a lot about the rules, players, or records.  My life feels okay, despite this.

Yet, I love the Olympics.  Not the player bios that all seem to have tragedies-overcome-redemption videos that NBC dwells on far too much, but the actual Olympic events.  I watch the Super G, even though I don’t know what the G stands for without a quick google.  I watch the biathelon with my son, who is intrigued by sports that require weapons.  I spent a lot of time this week discussing curling with my friends.  (We all want to try curling, mostly for the teflon shoe sliding. )

It is weird, and not easily explained, but every two years I get all settled in and watch non-stop sports (with breaks for night, and work) and then I forget all about sports until the next time the flame is lit.

There used to be a knitting Olympics.  I don’t know if it still exists online, but people would start a project during the opening ceremonies, and race to be done with it before the flame was extinguished at the end.  I decided to do a knitting Olympics project this year.

Snow colored yarn seemed appropriate.  And an outdoorsy sort of pattern, since all those skiers and snowboarders are going to be out in frozen nature for their competitions.  Plus I’m back on a lace knitting kick.  Understoried, the wrap version, fit all the right criteria.  I cast on during the opening ceremonies.

I’m on the 8th repeat of the first chart of Understoried.  The chart requires 14 repeats.  There are four or five more charts to come. I am announcing now that this wrap is not going to get finished by the end of the final ceremonies.  I’m going to be that last struggling athlete across the finish line.  Sometime in March, maybe.

But it is lovely to knit, and it is growing, albeit slowly, and I’m still going to call it my Olympic wrap.  Someday, when it is done.

My son’s hat was a much speedier knit, and my official finish for the week.  I’ve knit a number of hats from this pattern in the past, and it never fails to please.  Stretchy so it fits many head sizes, adaptable to any yarn, a little twisted stitch cable detail to keep it from being boring.  It is a winner, deserving of time on the podium. The pattern is Jesse’s Christmas hat.  The yarn is a random unlabeled green from the stash that my son chose.  I’m just now noticing it is remarkably similar in looks to the one posted on the pattern’s website!

I knit the finished hat, and also began the unfinished wrap, while we were in Seattle this weekend.  We watched the opening ceremonies from our hotel room and then spent much of the weekend out revisiting favorite tourist sites – eating crumpets and smoothies at Pike Place Market, watching the octopus at the aquarium, going up in the waterfront ferris wheel, and riding across the Sound on a ferry.  It was a really wonderful break, and the kind hotel bartender even let us have control of the cable remote so we could keep the TV filled with alpine skiing and curling matches in the evenings while we met up with relatives. 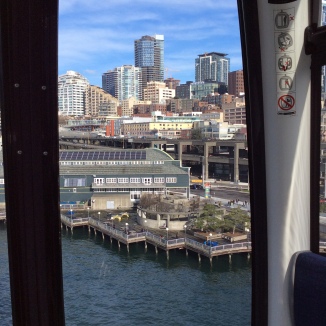 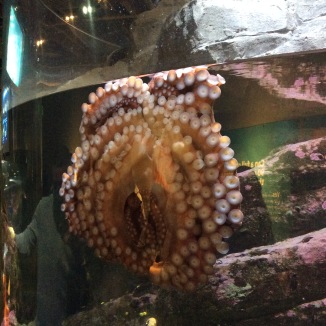 We’re back at home now, and back to work, but there is a four day weekend coming up quickly, so me and my knitting will be parked in front of the TV, cheering on the best of the best. 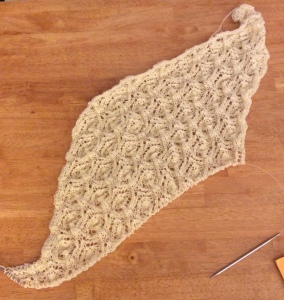 I go through stages where I binge on books, to the point of neglecting a lot of the rest of my life.  As an adult, it tends to happen in times of stress.  Craft binging doesn’t have the same stress reduction effect – I can still think and sew or knit.  Reading is pure escape.

The last month or so has seen a lot of reading.  I’m not quite sure what the true stressor is – there seems to be a constant low level.  Trying to juggle work and home is part of it, and the election sure isn’t helping.  But it means that the WIPs have been gathering some dust.

A small amount has been accomplished.  I made a couple of trips to my sister’s classroom to use all the tiled floor space to pin three finished quilt tops.

And I filled a bobbin and a half with more of the red fiber I’ve been working on sporadically. 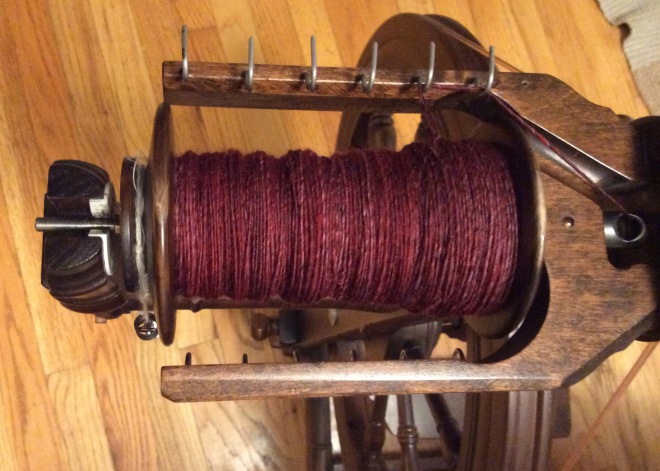 There was also a yarn sale at Little Knits that resulted in a bit of stash enhancement in the sock yarn category. 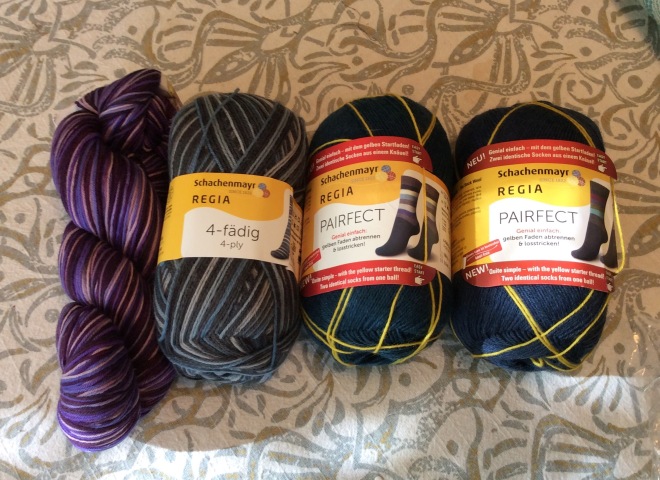 That is pretty much it on the crafting side of life.  No finishes, just some baby steps further down the road.

One more picture to share – the kids went back and forth on whether they were too old to go trick-or-treating but the real outcome was never in any doubt. The lure of the sugar was too strong.

In case there was any question, yes, I am definitely the kind of mom who steals candy to eat from her sleeping children.  No Snickers or peanut butter cup is safe from me.  They suspect, but have no proof.  😏

Autumn comes in third in my choice of seasons, but I do love the changing leaves.

Despite the wind storms of the last few days, most of the trees have retained the majority of their leaves.  But the colors are really beginning to appear!

This vivid part of the season is so short lived, before we start in with the dreary bare and gray months, so we enjoy it as much as we can while it lasts.

Maybe I need to knit something more in keeping with the colors of fall?  My current project is feeling more like the end of winter.

This first one is not my project, but it was accomplished in my house and I supplied some of the materials, and I needed something to do with fabric to post, so I’m using it.

My sister pulled an old desk chair from the Goodwill pile – we bought it at some point at Goodwill for my son, and now, even rattier, we were sending it back there until she claimed it.

She used a can of silver spray paint that I bought to tone down the chrome on the new dining room light fixture and improved on the chair’s black plastic.

Then she dismantled the cushioning on the back rest and seat, added in some extra batting, and recovered it all with the help of some duct tape (we couldn’t find the staples for the staple gun). The fabric is a horror movie poster print, her favorite genre.

We also have been painting two very basic Target stools for the kitchen’s new breakfast counter.  They were pretty boring, so we added some whimsy. 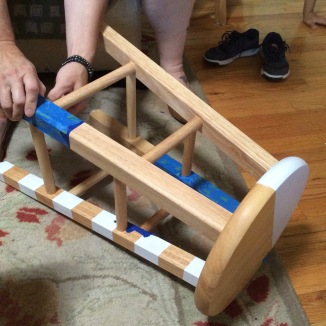 Meanwhile, on the fiber front, I’ve only gotten a few inches of knitting done.

I have only worked on my Volt wrap during odd moments, mostly while watching the Olympics.  I had a major set back when I screwed up an increase and didn’t notice until much later.  I had to rip back 6320 stitches. Ouch.  Such a dumb mistake in such a simple pattern.

But the kitchen-remodel-that-ate -summer, after a series of mishaps and set backs, is so close to ready for its big reveal. Just a few details remain.